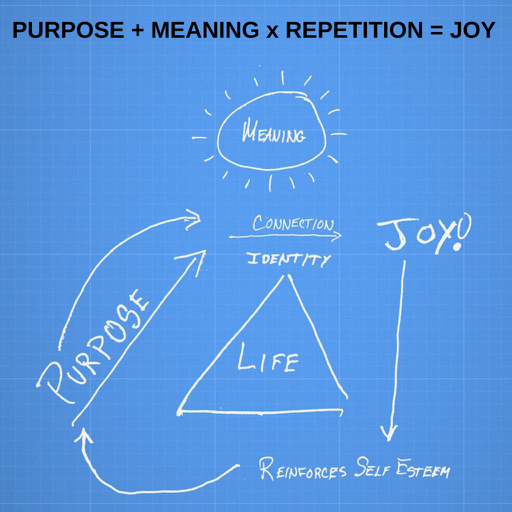 What a great couple of weeks I’ve had! I’ve received a lot of outside reinforcement for my life direction, and I’m flying high on that, so it’s time to revisit my purpose. Confidence is intoxicating, and ego is corrosive. The antidote is purpose defined by meaning. Let me explain…

I am a music teacher, and some of my former students played a show last week. I was overwhelmed with emotion, and wrote about what I realized here. How easy it would be to think “I’m so cool.. I taught them to blah blah blah….” But that’s a lie. I did next to nothing. Really, I just showed up to our guitar lessons, was as present as I could be that day, and showed them how to play what they wanted play. That’s it. Competency was the carrot. But really, I only knew how to play stuff I liked, so I was just doing what I wanted to do, and trying to line it up with what they wanted to do as best I could. See? I didn’t do much of anything, but have fun. Turns out that was everything, and I just didn’t know.

Purpose, meaning, and identity are forever bound to each other. I’ve written about this before. As Myles Kennedy said “I don’t want to say music saved me, but it gave me a purpose and helped me figure out who I was, and in that sense, it did save me.” By pursuing what we are passionate about, right down to the individual group of notes we want to learn, we are transformed into something new. Something stronger and better. We build confidence by achieving goals that are meaningful to us. By building on those goals, we scaffold esteem-able acts into a healthy self esteem. But, unfortunately, as we ascend, we are challenged. And then we fail, and fall back to the ground.

“I don’t want to say music saved me, but it gave me a purpose and helped me figure out who I was, and in that sense, it did save me.”

Every challenge leads us back to our identity, and it is either strengthened or destroyed. There is little middle ground, but we don’t want to talk about that… because it’s just too frightening. So we are careful not to fail too much. A parent’s job is to encourage their children to fail EXACTLY THE RIGHT AMOUNT. Wise parents will seek out experts to help them hit that sweet spot. I’m not saying I’m some expert, but I did keep trying, and I made sure it was fun for me, and I knew that would make it fun for my students. It turns out that is the zone. I did that by not taking students whose parents wouldn’t accept my one rule of doing what the student wants. That was WAY harder than I thought it would be, but that’s another story… My point is I had fun, and they did too. The meaning was fun. The purpose was to reinforce identity, carefully by learning to do fun things they wanted to do. And actually achieving it, and then taking it out and sharing that “cool thing” with the world. I get the sense that is the hardest part for a lot of performers, and artists who are successful AND talented. Some people have a massive ego, and seem to succeed in-spite of it, but no one succeeds purely because of ego. Good art comes from balancing ego and competency.

“What humans require in our ascent is purpose, and realism. Purpose, you could say, is like passion with boundaries. Realism is detachment and perspective.”

– Ryan Holiday From Ego is the Enemy

The next thing I knew, these youngsters were writing songs. And they were good songs! Songwriting is a rich and complex art form, and obviously I love it. I think one of the purposes of writing songs is to help us express who we are to our selves so that we can understand our selves, and thereby integrate our better selves back in to the group. This is really important for teenagers, and can be especially challenging for introverts. They were expressing themselves, and sharing it. That’s it. The whole formula for self realization.

The value of the fact that these men are still writing songs CAN NOT be overstated. Their success is by product of continuing. And they understand that, and so do their families. At the show I was in awe of how well they have both integrated gratitude with purpose. That’s not from me. I’m just learning it now. That’s from their families. The songs they write are full of suffering and striving and acceptance through gratitude. If you were at the show, you know what I mean. If not, do yourself a favor and listen to their music. You will enjoy it!

Sunday, 18. August 2019, The Bartlett, Lucas Brookbank Brown // The Holy Broke (listen for his song “Whiskey for a while…”, when it’s done I think it’s going to be a masterpiece.

Joel Ansett – Joel has a new album coming out this month. I got a copy at the show Friday. You are going to hear about it, because it’s going to explode. It’s just that good.

Don’t listen to Joel’s song “Slow Down” unless your ready to listen to it about a hundred times in a row. I can’t stop yet…

“Happiness cannot be pursued; it must ensue.”

PS: Writing long articles is much easier for me than the short ones. I’ve got two short ones coming up in the next two days. I only know this because they are done. Short = editing = time. In the meantime… the meaning of life according to Dr Jordan Peterson.

Processing…
Success! You're on the list.
Whoops! There was an error and we couldn't process your subscription. Please reload the page and try again.